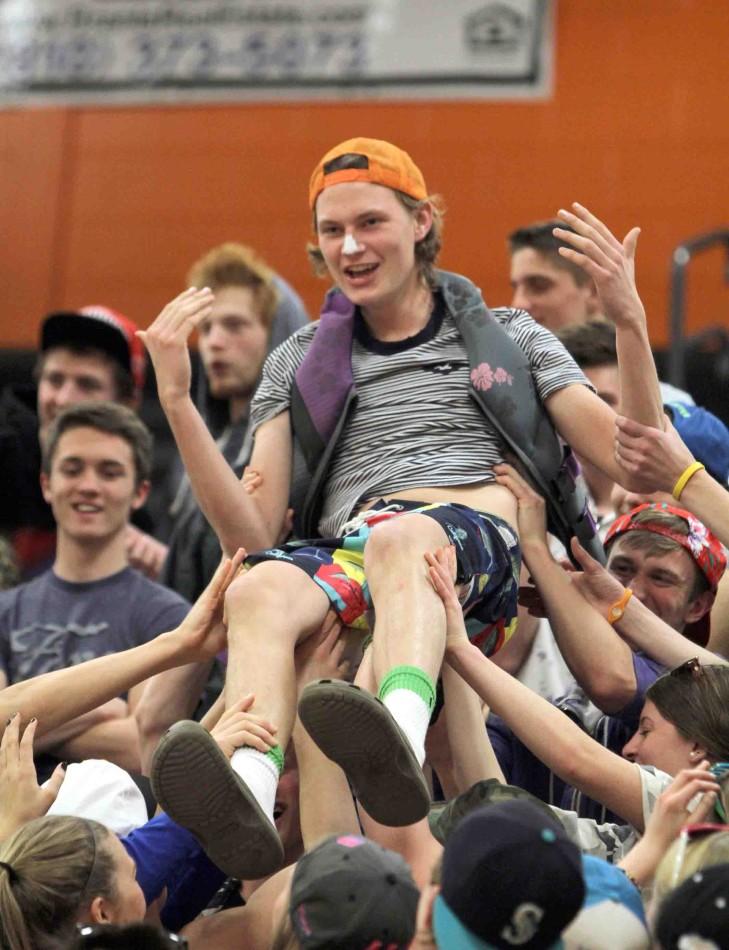 Surfs Up. Crowd surfing through the senior side of the student section during halftime of the boys basketball game against Lapeer East on Jan. 24, senior Alex Fulton is carried upward over the crowd. “I started crowd surfing over the seniors because we had to show up the juniors,” Fulton said. “The theme that night was beach night and this game was the most fun because of the huge crowd we had.”

Making his way to the front of the student section at the end of half time, senior Alex Fulton, dressed as Moses, prepares to “part the red sea.” He hits the floor with his plastic staff and the crowd splits in half, making a path up the bleachers for him to run through. The second he comes back down, the student section jumps and shouts in excitement, prepared to cheer on the basketball players for the rest of the game.

From the outfit themes to the chants, the student section at the Tuesday and Friday night basketball games brought in a bigger and more excited crowd.

“Our themes make us more involved in the games and I like feeling like I’m a part of something,” sophomore Macie Keller said. “My favorite theme was definitely ‘Opposite Gender Night’ because it was fun to dress up and act like the opposite gender and see guys wearing dresses.”

The themes varied from Beach Night to Thug Night to Hick Nation. There were also different “acts” that were preformed like “Silent Night,” where the student section sat down and remained quiet until the fifth point was scored, then they jumped up and yelled or when they held up newspapers as the opposing team’s names were being announced at the beginning of the game.
“To get ideas we would look around online and look at what other schools have done in the past,” senior Michael Conroy said. “Then we would add our own twist to make them work for us.”

The student section’s acts and chants made a difference in how some of the basketball players performed.

“I look forward to continuing to work with the student body to come up more themes in the future and to continue what was started this year,” Athletic Director Michael Bakker said. “Hopefully in the future we can integrate this into other sports as well and really get out and support all of our programs.”