Fenton football history with Clio as they prepare for homecoming matchup

Members of the varsity football team rest on the sideline. The tigers will face the Clio mustangs tonight for the homecoming game.

“Homecoming always has a special place for everybody,” Athletic Director Michael Bakker said. “You’re always wanting to win your homecoming game and wanting to perform well. I think the preparation certainly would be different between Flushing and Clio for homecoming. Just from the sheer fact of how the teams match up competitively, Flushing has been pushing us for a league title for many years, Clio has really struggled. That doesn’t mean you can take any opponent or any game lightly, you still have to prepare for them.”

The history between Clio and Fenton extends back 13 years, when the first game between them took place. Fenton was new at the time, and Clio was one of the teams who took Fenton down in their first three years, in which we went 2-25. 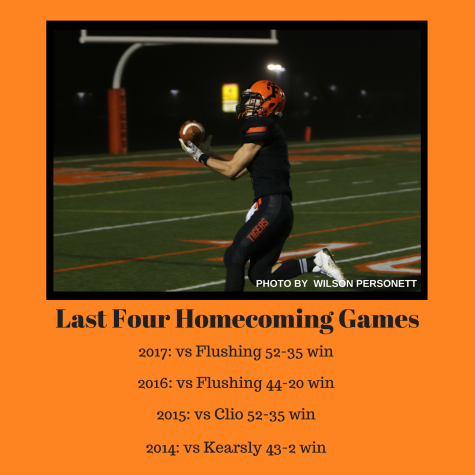 “They’ve beaten us once in 12 years,” varsity football coach Jeff Setzke said. “They sometimes struggle with their football. I think they play hard, but they don’t have a lot of football tradition. We’ve had a couple of good games with them, and I expect that they’ll come here ready to play, they do play hard. We don’t have that bitter rivalry like we do with Holly or Linden.”

Clio is the only obstacle in the way of Fenton getting their fifth homecoming win in five years. Coach Setzke wants to keep the team focused on that fact, instead of letting them focus on any distractions.

“I was just telling our team; let’s not lose track of the fact that – there are a lot of events that go on. Spirit days, pep assemblies, parades and dances – the entire event is based on the football game,” Setzke said. “That’s what people come back to see. Gotta keep them focused, this game is important. You get one when you’re a senior. You don’t get a do-over.”

With all the distractions, there is also the thought people are returning to Fenton just for this game that rides on the player’s shoulders. One thing that athletes may struggle with during the week is keeping those distractions away and instead keeping their practicing the main priority.

“Athletes I think, especially football players, because the game is centered around them on Friday night, have to really focus the week of homecoming, regardless of who we are playing, “ Bakker said. “There are so many outside influences that could pull you away from that game prep, so that can sometimes trip you up. The emotions also run really high, there are a lot of people who come back to town to see the game. Whether it’s graduates from decades ago, or graduates from last year, and you certainly want to perform well when they’re in the stands watching for you.”

Running with Setzke’s mentality, the team looks to prepare for this game like it was any other homecoming game and keep focused on keeping the distractions out of their head.

“The team is trying to get in the zone, we just came off a big win against Linden and trying to get back in,” junior Braden Moore said. “It’s a big game, it’s homecoming, we need to win this one. With the hype, we absorb it. We try to ignore the distractions until after the game, the distractions don’t really get to us.”

While he wants his players to have fun, Coach Setzke also wants them ready, and looks to keep that winning streak alive, “we want to keep it that way. Like I said, we need to win. We need to keep moving forward, get ourselves to 4-1 then we’ll worry about next week.”