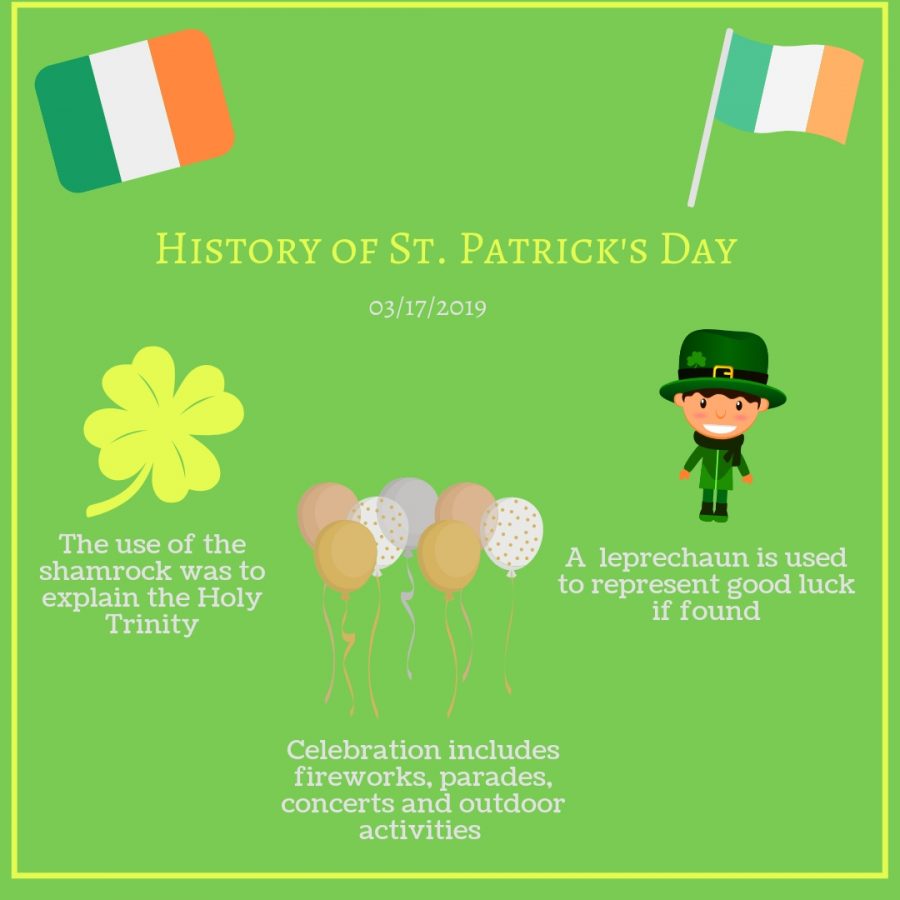 Modern St. Patrick’s day celebrations include the festive gold and green associated with Lucky Charms and the overzealous Irish pub music that plays in the street alongside green painted celebrators. The ideas that are associated with Saint Patrick’s Day formed over a hundred years ago.

The Irish holiday focuses on the celebration of the  patron saint and national apostle of Ireland, Saint Patrick. Born in Roman Britain, he was kidnapped and brought to Ireland as a slave at the age of 16. He later returned and has been credited with bringing Christianity to the people of Ireland. His died on March 17 around the year of 461.

Saint Patrick established monasteries, churches, and schools. The legend surrounding Saint Patrick is prominent in Irish culture. He drove snakes out of Ireland, explained the Holy Trinity (Father, Son and Holy Spirit) using the three leaves of the native Irish plant, the shamrock.

The type of modern day celebrations for St. Patrick’s’ Day didn’t begin until the 18th century. The holiday falls during Lent and with the celebration of St. Patrick’s Day, it gives Christians a day off of the preceding abstinence leading up to Easter.

In Ireland, the holiday is observed as a religious occasion. Up until the 1970s, Irish pubs were mandated to be shut down on the green-filled holiday. Since 1995, massive markets have been used by the government to bring tourism and showcase Ireland and their culture to the rest of the world. Today around 1 million people annually take place in the Irish holiday with the wishing of luck brought on by the shamrock.

The popularity of the famous Irish holiday took off with the US emigrants that transformed the holiday into a famous celebration. Cities with large numbers of Irish emigrants such as Boston, New York City and Chicago, with the most political power, swayed the most extravagant celebrations. Boston held the first Irish parade that celebrated St. Patrick’s Day in 1737 and New York followed later in 1762. Since 1962. Chicago has colored the river green to mark the holiday celebration. Saint Patrick’s Day takes place on March 17 of this year.