Senior Alex Marsee takes on the role of “Perfect” in Columbinus 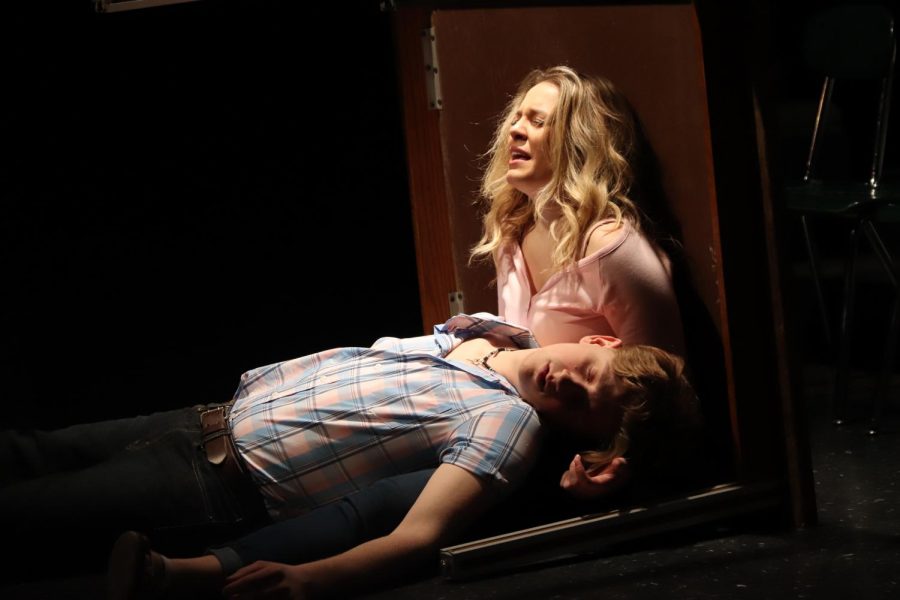 Columbine; hearing the city strikes a certain fear down any American that knows its name. The site of the first mass school shooting of America, the small town quickly made a name for itself that will stick forever. As many may know, the Columbine High School shooting left a huge impact on school systems throughout, and the stories of the shooters, Eric Harris and Dylan Klebold, became one of the most wanted in the country. Here in my small high school of Fenton, Michigan, we decided to take on the gripping production that dives deep into the horrific event, and enters the minds of both the victims and the killers.

‘Columbinus’, a play written by the United States Theater Project, is composed of two acts. The first act descriptively portrays the common stereotypes of high school through various characters; AP, Jock, Faith, Rebel, Perfect, Prep, Loner, and Freak. This depicts of scenes showing the hardships of life and what teeneagers in high school go through, in a stylized theatrical way. The second act begins, when ‘Loner’ becomes Dylan Klebold and ‘Freak’ becomes Eric Harris. They act out scenes from the actual basement tapes made by the real killers. It shows how and why they set out their plan, and that no one had the chance to stop them. Finishing the play, there is a simple reenactment of the crimes the boys committed that day and the lives that were sadly lost.

My role in this production was the character, or stereotype, “Perfect’. A spin on the modern popular girl, “Perfect’ shows the image-obsessed typical girl found in many high schools. But, you may never know what a person is going though. The role showed the issues teenagers have with opening up to others and the problems of young pregnancy. Taking this on was difficult, the role is very real and it was an important message that needed to be shared to young woman. Their story needed to be told, and although it was hard, I knew it needed to be done.

Taking on such a mature subject was difficult for every person in the cast. School shootings are very real, and that’s how we treated the production. Performing it in front of our peers and our family was hard, but important nonetheless. We were teaching the audience what some can do and proving to the audience that this can happen anywhere, not just Columbine. When in this mindset, you start to realize how scary in real the world can be. Sometimes paranoia and fear would affect us outside of rehearsals. After all, we put our heart and souls into the show.

The Columbinus show was very successful. The attendance was high and the feedback we got was fantastic. Perhaps though, the most important thing was knowing that even if just one person in the audience was listening, then all of our hard work had paid off.