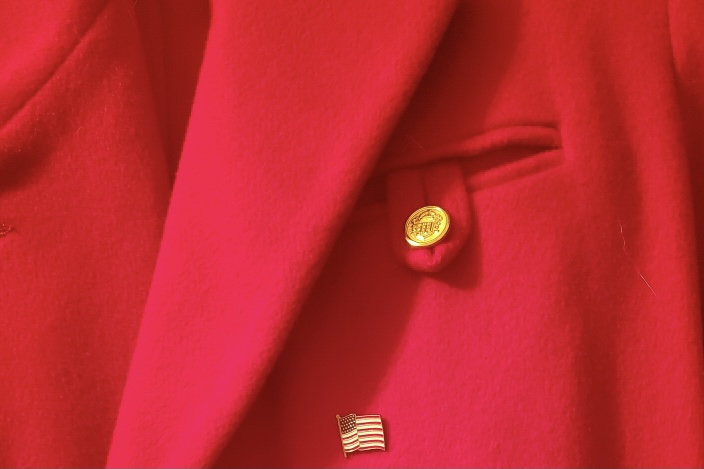 Inauguration Day didn’t only celebrate a new administration but was filled with stylistic looks. Some of these outfits became famous, projected on news channels and talked about in articles from Vogue, to Harpers Bizarre and CNN, while others were less famous and kept down low.

The girls were later seen wearing a pop of color at the Inauguration Concert and brother Beau Biden Jr. had an adorable vest and plaid coat with a blue baby bonnet from Feltman Brothers as he was holding a silver rattle.

Biden’s youngest daughter, Ashley Blazer Biden, was seen in all navy with a Cartwell coat while and later in a black tux during the inauguration concert. Meena Harris, Vice President Harris’s niece, wore all emerald green with a dress designed by Ulla Johnson with sparkly boots.

Dr. Jill Biden was seen in all blue at Inauguration Day and later all white at the inauguration concert, both of her fits were designed by Gabriella Hearst with material collected in New York City’s garment district only using materials from existing fabric and dresses, “We wanted to reduce an environmental impact with Dr. Biden’s dress, so we recycled it,” Hearst said.

With embroidered state and territory flowers in both gowns and the Delaware peach blossom flower right at Dr. Biden’s heart— each taking 2 hours to apply— the dress was a public statement representing unity. At the seam of Dr. Biden’s dress was a quote from Benjamin Franklin, an ode to her days of teaching, “Tell me and I forget. Teach me and I remember. Involve me and I learn.”

Hilary Clinton, Michele Obama and Vice President Kamala Harris were seen in shades of purple. Obama wore a black designer Sergio Hudson, her fit was plum with wide-leg trousers, the color meant to represent a mixture of both parties and unity. Harris wore the same designer as Obama, her shade of purple most likely referenced her logo for her 2020 bid and Shirley Chishol, the first black woman of congress. Clinton was seen in a more simple fit by Ralph Lauren in a purple shade representing a modern-day feminist movement.

Ella Emhoff, stepdaughter of Vice President Harris, walked out of the White House wearing a Miu Miu dress synched with a plaid pattern, large collar and gold accents, and at the inauguration concert, Emhoff wore an all-purple dress with ruffles by Batsheva, she was proclaimed in articles as the “Best Dressed King” of the day.

Bernie Sanders looked adorable dressed in a Burton taupe parka with gifted mittens made by Vermont teacher Jen Ellis, who mentioned the mittens were made from recycled plastic and old sweater wool. Sanders socially distanced from everyone, he told CBS that he wanted to be warm and safe, so he did.

Amanda Gorman wore a yellow coat and white dress with a red headband, created by Prada. She recited her poem “The Hill We Climb” she told Vogue, First Lady Biden wanted her to perform, from watching Gorman perform while wearing yellow….the poet duplicated this look.

The day ended on a note with President Biden entering the office and celebrating his new administration.