As people of all ages gathered at the Ellen Street campus, they sat down and took part in the annual Princess Ball on Oct 24 and 25. This event is an interactive production that children can participate in; its purpose is to make them feel like they have been transported to a fairytale- like world.

“It is a show for kids, but grown-ups will enjoy it even more,” organizer Sandy Jablonski said. “We come to Fenton every October and it’s the first show of the season that we do.”
Jablonski used to be a teacher, but decided she wanted to feel closer to her kids. She wanted to create an event for them but had no support and no financial help at first. Her husband began to come home late every day, then one day he showed her the surprise; he had built a castle, which is the setting the actors use within the show. He had made her dream come true.

“This is my first time in the show; the owner had messaged me on Facebook and I knew a few cast members, so I accepted,” actress Taylor Przywara said. “It is fun to bring back the tales and being with the kids is a blast. I will definitely do it again.” 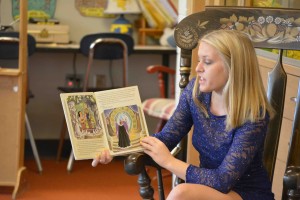 e of a bird, Tinkerbell fairy and a fairy godmother within the show. But not only were the performers dressed up, students in the National Honor’s Society volunteered at the event.

“I wanted to do it because I thought it would be fun to dress up and tell stories to little girls; and we get to watch the show,” junior Kasey Walsh said. “We were asked to make tattoos, paint their nails, serving cookies and read stories to the kids.”

Throughout the show, the actors and actresses performed as well known Disney characters such as Cinderella, Snow White and Aladdin. The children got the opportunity to dance, take pictures, and leave with memories of the event.