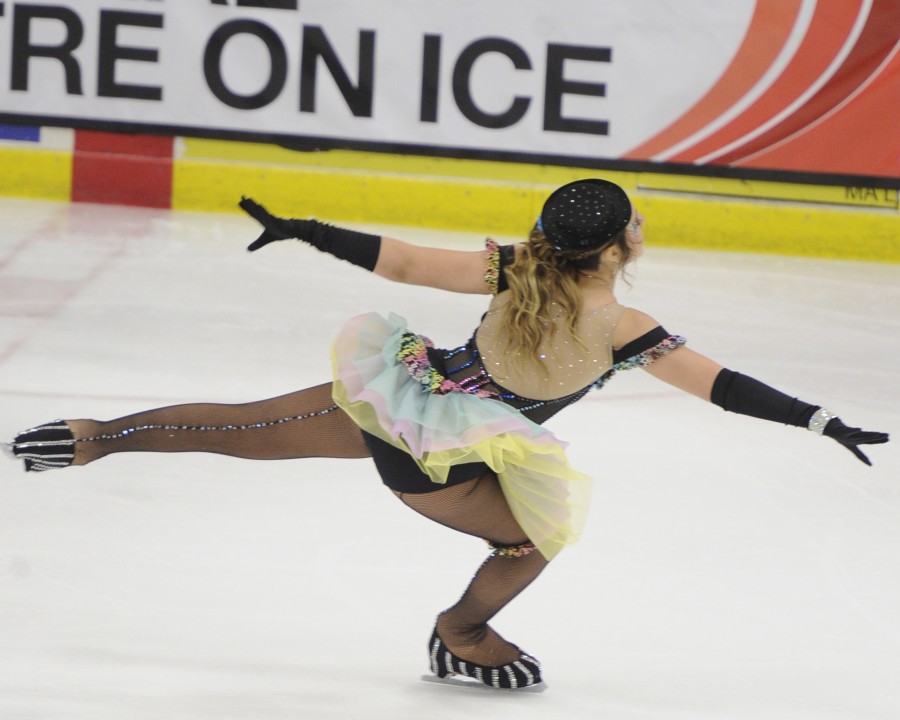 The crowd roared with applause as freshman Halle Greenwald stepped onto the podium to receive her medal. She beamed as the symbol of all her hard work, a gold medal, was placed around her neck. The road to becoming the junior national champion for figure skating was not easy; it came with its own challenges, triumphs, and sacrifices.

“After I leave school I skate until about 7 p.m. at Hartland Ice Arena. On Saturdays I skate with my team for about seven hours,” Greenwald said. “Practice takes up a lot of time, but the sacrifices [I have] made for skating, like missing school, do not really phase me anymore.”

Despite the fact it is time consuming, Greenwald has been skating competitively since she was seven, so the sacrifices made for her sport do not affect her. Her family is no stranger to this level of commitment either; her mom, sisters, aunts and cousins all skate.

“My aunt is my coach, which I think is sometimes a positive and sometimes a negative,” Greenwald said. “It’s nice because I get to see my family all the time, but my aunt pushes me harder than some of the other girls sometimes and expects a lot out of me. So I would say it’s a mixture of both.”

Figure skating competitions occur year round. These events range from Theatre on Ice, which are team competitions that incorporate acting with skating, to freestyle competitions that are scored solely on how well the individual competitors execute various tricks while sometimes incorporating theatrical elements.

“With Theatre on Ice you have to tell a story,” Greenwald said. “It’s like a whole program and you have to skate in sync and complete specific jumps, spins and turns. They score you based on that and how well you portray the story.”

Greenwald’s team won the World Cup for Theatre on Ice in France last April. Along with this, Greenwald competed against more than 300 people at the National Showcase in Brighton this past summer, where she was named the junior national champion for her solo.

“For the Showcase, everyone starts off in their first groups of only their own level, then if you get into the top three or four you move onto the final rounds. If you win that you move onto the ‘Parade of Champions,” Greenwald said. “It is kind of like a tournament; you have to keep winning different events until you get to the championship round.”

Greenwald admits that although the sport can be mentally tough at times, it is something she sees herself doing for years to come. While she does not plan to head to any international competitions in the future, she plans to eventually become a coach.