Varsity football team ends their season in the playoffs

Finishing their season against Walled Lake Western, the varsity football team made another run into the playoffs this fall season. Despite not making it past the first round of playoffs, the work that got the team that far isn’t overlooked by them.

“The team played really well together, we had really good team chemistry,” sophomore Austin Henard said. “We worked really hard together and knew what our goals were. We made playoffs but had a sad loss to Walled Lake Western. We had beat them up front good but they just had skill on the outside receivers and running backs that we didn’t, but that makes us work harder for it next year.”

Members of the team relied on their teammates to be successful.

“After playing all four years, I’ve realized the best thing Fenton football has given me are my teammates,” senior Dane Dean said. “If I didn’t have them, football wouldn’t have been fun and I know that they’ll be my friends for life and we’ll always be there for each other.” 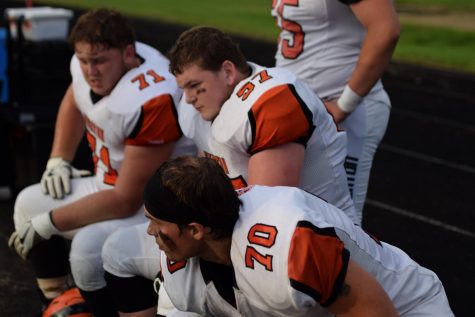 PHOTO Matt Cellotto
Members of the varsity football team rest on the sideline. The tigers will face the Clio mustangs tonight for the homecoming game.

The team’s success is attributed to the friendships they made.

“Our goal is always to win the Conference Championship and compete at the State level for District and Regional Titles,” varsity football coach Jeff Setzke said. “Our players have bought into the same goals. We did not win either this year. So, that alone will motivate our kids in the off season.”

The football team has begun morning weight training, Mon. through Thurs. before school. Those interested in joining the 2019-2020 football team should come to morning practices or contact head coach Jeff Setzke at jsetzke@fentonschools.org